Monarch Butterfly Populations are Soaring Downwards: Why Should You Care? 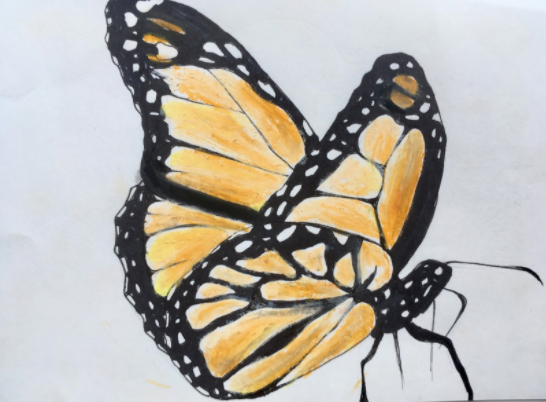 these are ten words will fix later on to work

While many of us grow up squirming at insects in the park, there is one species that has alway been an exception to that: the monarch butterfly. With their regal name and delicate nature, it’s no surprise that these species have enamored us for centuries, and found their way into our culture. But now they may be going extinct.

In their earliest form butterflies may have been around as long as 175 million years ago. While that might not seem like a lot, compare it to the estimated six million years ago when humans began to evolve from apes in Africa. Monarch butterflies are native to North and South America, and while they can’t be found in South American anymore, populations of Monarchs have been able to thrive in most places their host plant, milkweed, is. Milkweed, a weed per its name, is the only plant that is host to monarchs, which exclusively eat and lay their eggs on them. Today you can find populations of Monarchs in North America as well as Australia, New Zealand, Portugal, and Spain.

But despite all of the aforementioned places that butterflies can be found today, they still predominantly exist in North America in two main denominations, the western and eastern monarchs. The distinction between these two populations doesn’t have to do with the monarch’s genetics, but instead in their migration patterns. Western monarchs breed west of the rocky mountains and they overwinter, that is to migrate as the weather gets colder, in southern california. The eastern monarchs breed in the Great Plains and Canada, and overwinter in Mexico. Despite this difference, both populations have seen drastic declines in recent years.

In the 1990s around 1.2 million western monarchs journeyed to Mexico. In 2017, only 29,000 monarchs made the migration, a number that the population has failed to rebound from over the past three years. Over the same time frame the eastern monarch population has seen a decline of over 80%.

There is one main factor to blame for the population’s decimation, herbicides. Herbicides, or weed killers, are substances that are used to kill unwanted plants so that the desired crop can grow without competition or harm.

Milkweed is the only host plant for monarch butterflies. They eat it, lay their eggs on it, in fact their entire life cycle is synced up with the growth of the plant. Over the past two decades it has been the victim of Monsanto Companies’ Round-up. At the end of the twentieth century Monsanto began creating genetically modified foods, especially corn and soy plants, that could withstand certain herbicides, which allowed them to be sprayed all over the fields killing all of the milkweed plants without harm to the desired crop. As a result the milkweed population has declined by 80% over the past twenty years.

University of Minnesota Conservationist Karen Obserhuser believes that this is the clear cause of the Monarch Populations decline.

“We have this smoking gun,” Oberhauser told Minnasota’s Public Radio. “This is the only thing that we’ve actually been able to correlate with decreasing monarch numbers.”

But despite this so-called “smoking gun” being identified, monarch’s won’t see coverage under the endangered species act anytime soon. There are around 161 species that are said to have a higher priority in terms of protections. Because monarchs already have some state centered conservation efforts, and there are populations elsewhere on the Earth, for now they have been denied until they are revisited for protection in 2024.

“Getting put on the candidate waiting list is better than getting denied,” says Center for Biological Diversity conservation biologist Tierra Curry to Science magazine. “For the western population, protection was needed yesterday…The longer listing is delayed, the more difficult and expensive recovery planning becomes.”

That said there are programs in place working to protect the monarch population. There are federal programs emerging to incentive farmers not to use herbicides like Round-up, and millions of milkweed stems are being planted across the country.

But even more than all of this there is a cultural and symbolic something about butterflies. It’s their journey from a caterpillar to a winged creature. It’s places like the natural history museum where students field trip and look and hundreds of hundreds of butterflies. It’s an enchanting sense of magic and surrealism that comes with their flight.

Butterflies also have a diverse cultural significance. The western monarch population’s migration to Mexico aligns with the MexicanHoliday Dia de los muertos, or Day of the Dead, where family and friends honor family and friends that have passed away. Monarchs are believed to be spirits of the dead as their winter migration aligns with the Holiday. Butterflies even have a cameo in the Pixar movie Coco.

If we have any duty to our planet and the world around us, it’s to leave the world at least as sufficient as we found it, and letting butterflies become a memory of the past would certainly violate this. We owe it to them to allow them to view our planet in the same way that we do. If we don’t there will be people who come after us who will miss out on the wonder of a butterfly kiss as their delicate wings grace your fingers and bring them, or caring for them as larvae in a school classroom, and watching them as they nibble on flowers.