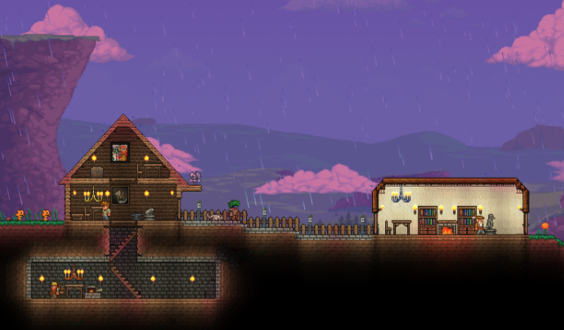 A simple town I built in my experience in a brand New World in Terraria, the possibilities are truly endless.

A classic in the video game industry, Terraria, released by developer Re-Logic turned 10 on May 16. The game originally released back in 2011, and since then has amassed a critical following of players, reaching a whopping 35 million copies sold worldwide! The final major update to the game, 1.4 Journey’s End, was released exactly a year ago, on the game’s 9th anniversary. Since then, there have been smaller updates to the game as well as news that the new update would also move to console versions. Currently, Journey’s End is on Mac and PC, as well as Mobile devices. Allow us to rewind the clock however, to see the beginning of Terraria and its evolution from all the way back in 2011 to where we are today in 2021.

Starting back in 2011, Terraria was released directly only on Windows computers and sported a nostalgic 2-D format with a great emphasis on exploration and building. That era of Terraria was only on the 1.0 update before any major weapons, materials, or even bosses to defeat were even added. As the game progressed, 1.1 was soon released adding Hardmode and the great boss, the Wall of Flesh as well as the several Mechanical Bosses. 1.2 added a plethora of weapons and resources as well as adding more balanced gameplay for when players enter Hardmode after defeating the Wall of Flesh. 1.3 continued with this trend of new resources and weapons, new or improved bosses, as well as brand new NPCs (Non-player characters). Now towards the present where we reach 1.4, the final major update, Journey’s End which added new animals, weapons, materials, and several quality of life improvements. Keep in mind that this is a brief summary of each update and many of them contained hundreds of brand new features. Today players can build massive structures, forge the most powerful armor and weapons (yes, even magic!), fight great bosses that drop expensive items, and even ride different mounts. The possibilities to build your own character in the game are really infinite, why not have a focus on becoming a mage character perhaps with an emphasis on magic weapons and abilities or even a melee character with an emphasis on using swords and having items that boost melee damage. In addition, NPC’s (Non-Player Characters) can move into worlds created in Terraria as well as ranging from a Wizard, a Goblin Tinkerer, and even a Tax Collector! The ways to play the game are truly infinite and are refreshing every time.

As the game has progressed, it’s been released on several different platforms as well. Ranging from mobile devices, consoles, Mac and Windows, and even the Samsung fridge. I myself started out on console, then mobile, and today mostly on PC and everytime I play, there’s something different all the time and it’s always a simply refreshing experience. The pure joy of finding something new or some random hilarious item is the experience that keeps millions playing every year and even as you read this article! Terraria has not only become popular with players at home, but has become greatly popular on platforms such as Youtube and Twitch where people are introduced to the game everyday. In my experience playing, I had a pleasure to even introduce my sister to the game which she now considers one of the best video games to release – my thoughts precisely when I started for the first time.

Terraria has transformed from a cult classic to a global phenomenon due to the refreshing premise of the game as well as the fact that its almost available on every platform. Terraria not only defined a generation of gaming, but was and still is today one of the most creative and well thought ones. It’s the epitome of creativity, adventure, and enjoyment. The ten years of consecutive updates that developer Re-Logic gave players is commendable and I myself am greatly thankful for. Terraria will always remain a gem of excitement, enjoyment, and will always remain in the treasury of video game greatness and memorabilia.

Terraria can be purchased at the following links: (Only Original Prices Shown)

Steam for Windows and Mac for $10: Terraria on Steam (steampowered.com)