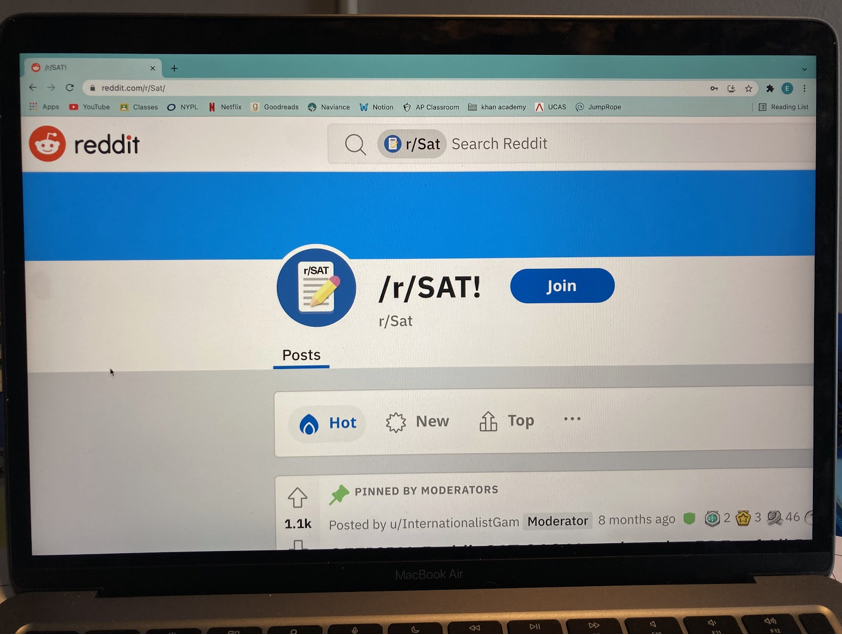 While online student communities may seem helpful for students, they can severely exacerbate stress and comparisons around standardized testing.

This past spring, I undertook the dreaded rite of passage for high school juniors: the SAT exam. After studying for weeks, finally sitting for the test, and waiting 21 days, I was gearing up for score release day. The SAT website said that scores would be available on May 4th, but a few days before this date, the CollegeBoard emailed me that the scores would instead come out on May 5th. I didn’t know which date was correct, but I was consumed with AP exam preparation and didn’t give much thought at the time to the SAT score release day. That was, until I went onto the SAT Reddit page the night before May 4th. I wanted to know whether other students were also confused about the contradictory score information. In doing so, I was forcefully swept up into the stressful echo-chamber of students eagerly awaiting – and stressing about – their SAT scores. While I hoped that the SAT Reddit would provide solace, I instead discovered that online student communities can exacerbate the stress and academic comparisons high school students know all too well.

In the background of my Zoom classes on May 4th, I obsessively refreshed the SAT website in hopes that my score would suddenly appear. Meanwhile, I also constantly refreshed the r/SAT page to see if any students had updates about scores. I and other students on the Reddit page repeatedly called CollegeBoard customer service to inquire about the true release date. We were deceitfully told that scores would periodically be released throughout that day on the 4th. At one point in the day, someone claimed that they had received their score. My heart began racing as I scrambled to refresh the SAT website, finally expecting my score to materialize. Alas, this user was lying, which just made everyone awaiting their scores even angrier and more desperate. After a whole day of unnecessary stress and obsessively clicking refresh, we received our scores at 8AM on the 5th, like the email – but not the website – had said.

While this score release day confusion was ultimately a failure on behalf of CollegeBoard, I shouldn’t have let the uncertainty eat away at me for that whole day. Going onto r/SAT killed any patience I had to wait one more day for an exam score that isn’t even that significant during this year’s mostly test-optional college application process. I was ultimately happy with my score, and I wanted to see how these strangers on r/SAT felt about their results after an eternal day of waiting. This was the second reason that browsing the SAT reddit was a bad idea – comparing myself to how others had performed.

Many users posted screenshots of their SAT scores on Reddit, some out of pride and satisfaction whilst others expressed the frustration of not meeting their goals and expectations. However, everyone has their own definition of a “good” or “bad” score, and some students on r/SAT can be insensitive to this reality. Some students were complaining about how disappointed they were for scoring, say, a 1510 when they hoped for a 1570. Students absolutely have the right to be upset about their scores, especially after all their grueling studying, but by ranting about how “awful” they did for getting a score in the 1500s (the 97th-99th percentiles), they inadvertently make other students who scored at or below that score feel witless and insecure. Despite my initial satisfaction with my score, I began to doubt myself, questioning whether I studied enough compared to other r/SAT users who seem to be disproportionately high achieving students. I failed to remember that my academic success is entirely unrelated to anyone else, least of all strangers on a Reddit page.

The world of online student communities is vast. Fortunately, I have learned my lesson and did not let myself view the APStudents Reddit page when AP scores came out over the summer. While the premise of these communities – to offer support, advice, and camaraderie for fellow students – has good intentions, the reality is quite different. Comparison runs rampant and people often fail to consider their language when talking about their achievements and (perceived) failures. These echo-chambers of stressed out teenagers are reflective of internet culture at large – communicating with strangers through a screen can be more harmful than assistive.